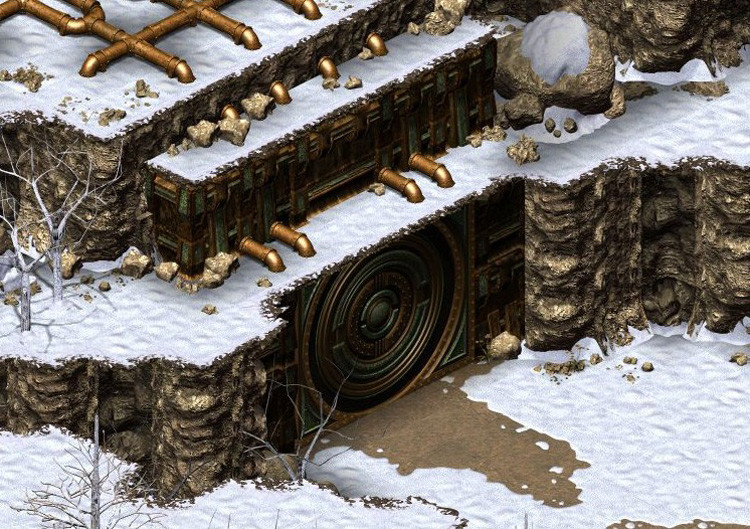 Vault 0 was a place where the geniuses of the pre-War United States could be kept in cryogenic stasis – their brains were extracted and frozen for the duration of their “residence” in this Vault. They were hooked up together to one big supercomputer called the Calculator, which was supposed to function in collaboration with the brains of these pre-War geniuses to design and nurture an ideal human society in a post-War U.S. by educating the survivors and residents. Due to budget cutbacks by the Department of Defense (because of a false sense of safety as a result of the repeated drills), several important backup systems were not included to the neuro-link systems. This made the Calculator corrupted and instead of releasing the robots to make the Wasteland safe for humanity, the Vault 0 robots began to exterminate all life, completing the so called “pacification protocol”. As for the unfortunate geniuses plugged in, most of them suffered severe brain damage, dementia, and mental retardation from a combination of age and prolonged radiation exposure (not mutation). Technology, it seemed, has not been affected by the ravages of nuclear radiation. 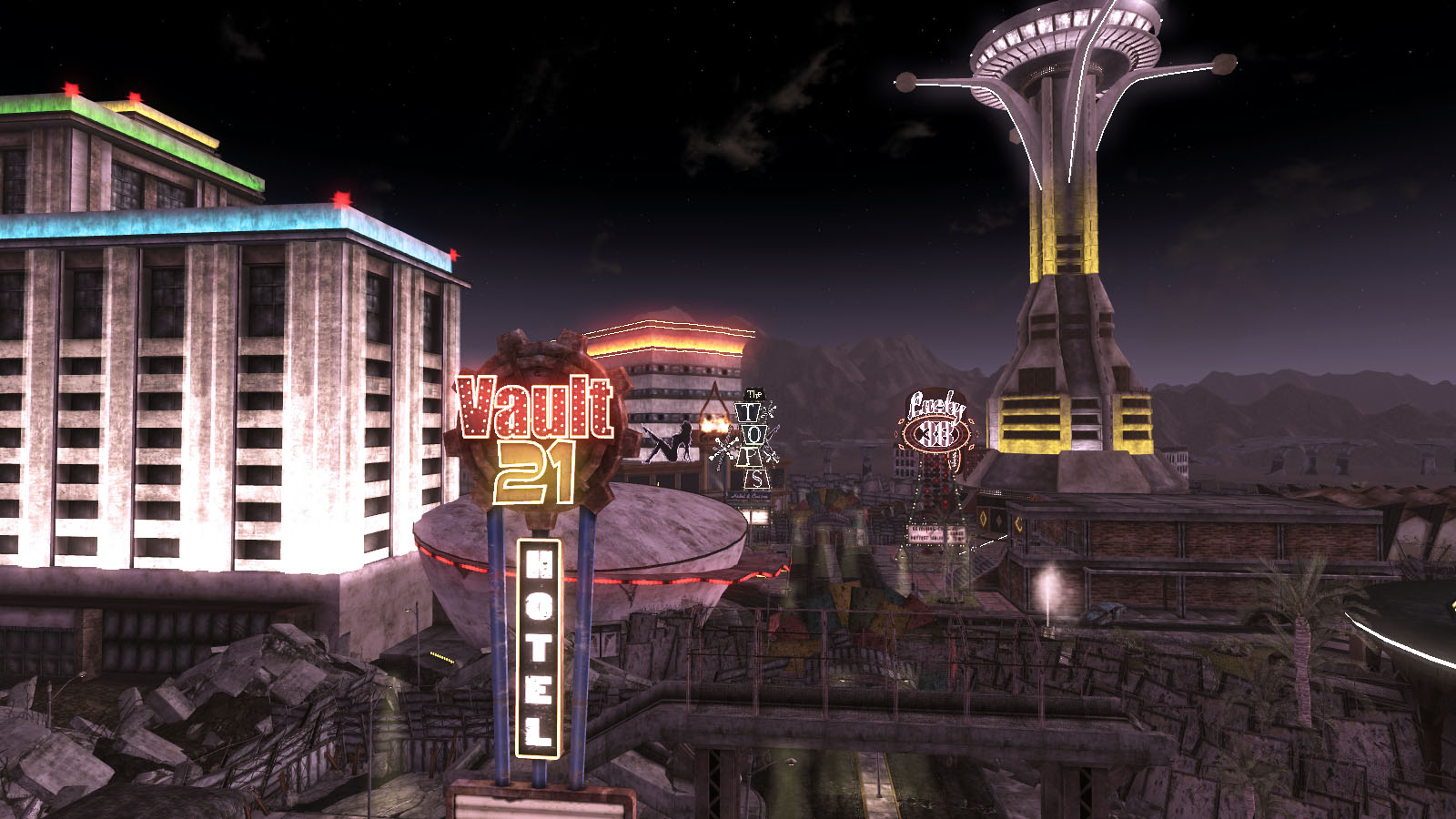 Vault 21 was unique among other vaults, as it was one of the only non-control vaults that didn’t end up killing it’s inhabitants In Vault 21, everyone in the vault was equal. It was created with a perfectly symmetrical layout, and the dwellers settled their differences via games of chance. Reliance on luck to solve problems created what might be considered the perfect realization of anarchy: a society in which everyone is equal and no one has an advantage over the others. Vault-Tec ensured that every person admitted to the vault when it first sealed was a compulsive gambler, and were unable to decline when Vault-Tec personnel running the vault informed them that this was how the vault was to be run. The original dwellers then passed on their lifestyle to their children and so on. Unfortunatly, sometime between 2271 and 2281, Robert House discovered the location of the vault. He won ownership of it in a high risks poker game, and proceed to evict all its inhabitants, gutting the shelter for parts and filling all but the top floor in with concrete. The top level was converted into a hotel, the last remains of a once thriving vault 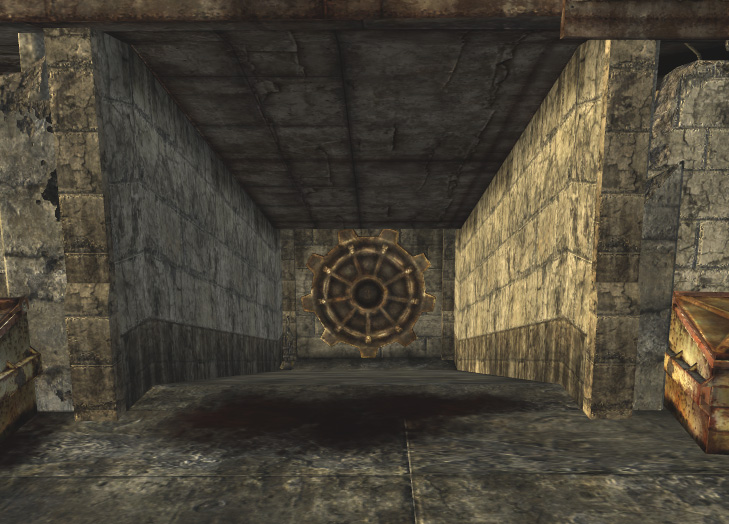 A tragic story on the dangers of the Wasteland, Vault 3 was a control vault that was intended to open after 20 years. However, being cautions of the dangers outside, the inhabitants kept it closed for much longer Much like Vault 13 however, a problem with the water purifier forced them to open the vault door and begin trading with outsiders. This worked for a short time, however the Fiends, a gang of drugged raiders, caught wind of the place and decided to stake a claim. Due to the lack of security, the Fiends easily gained entrance, slaughtering all the residents and making it their hideout In many ways, Vault 3 was the ideal post-apocalyptic community that had all too often evaded Vault-Tec’s many experiments. The vault’s isolation didn’t affect the residents. They maintained an orderly, democratic society, and, unlike other vaults (Vault 101 in particular), the overseer wasn’t a dictator or a megalomaniac. Once again though, as with so many other Vault-Tec designs, the water pipes failed, and by necessity the community was forced into contact with the Mojave’s savage peoples which was ultimately their undoing.

This vault’s experiment was devised by scientific genius Derek Greenway. Most of the parents were either “accidentally” redirected to other vaults or were in the early stages of health conditions that would no doubt cause them to die soon after entering the vault. Instead of a human controller, Vault 29 would have a ZAX super-computer. The ZAX would be programmed to raise children with the aid of robotic helpers, educate them in a primitive culture, and upon their reaching maturity, release them into a controlled environment. They would then be free to rebuild society from the ground up. When the Great War started and civilization began to fall apart, Diana, one of Greenway’s colleagues who was appealed at his idea, appropriated control of a satellite dish and aimed it at Vault 29. She then transmitted a series of security codes to the vault’s ZAX unit, and gained control. Over the years that followed, Diana was able to see to the upbringing of the children, who founded the village of Twin Mothers outside of the vault. Every year she ordered a worker robot to leave the vault under the pretext of checking conditions outside. In reality they were preparing an area to receive the vault populace when they were ready to leave. Lastly she had a series of projectors installed at strategic locations, ready to project her chosen image. Finally, when the vault doors were opened the inhabitants found Twin Mothers built. Everything was coming together, Diana was ready to play god. 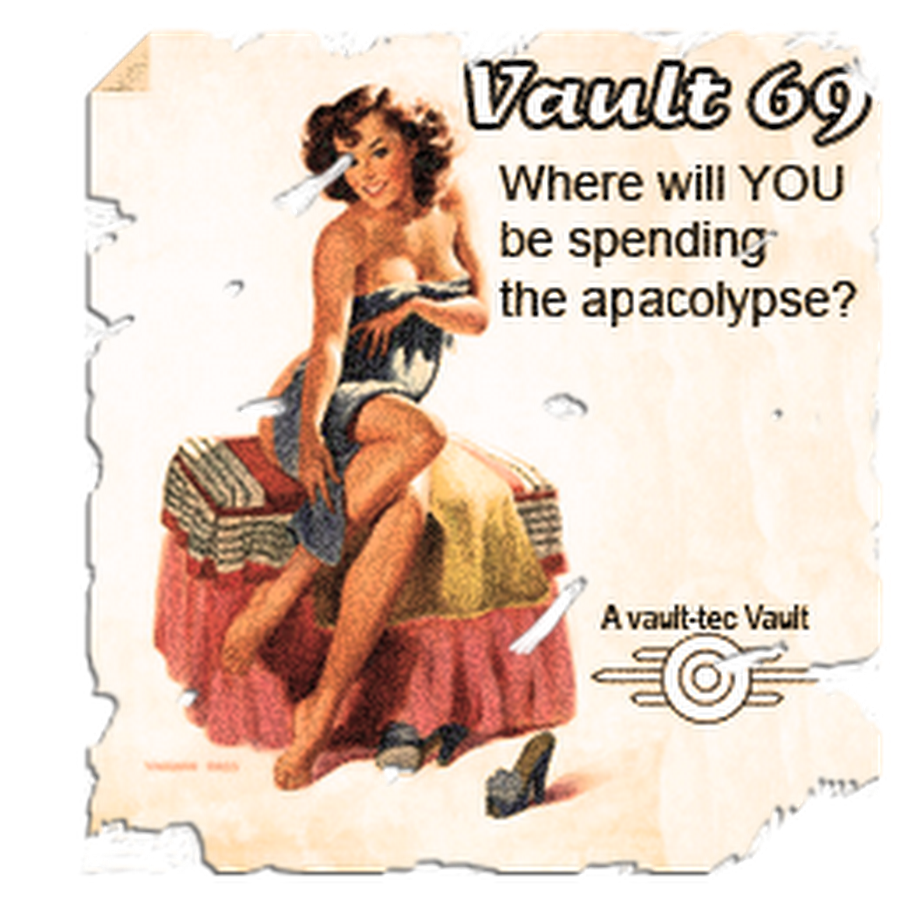 Two of the more disturbing Vault experiments, these twin vaults were populated by an outrageous male to female ratio, 68 having 1 female and 1000 men, Vault 69 having 1000 women and just 1 man While obviously just a stab at the “69” sex position, the actual reality of the situation is horrifying. Bar 99% of the majority sex in either vault being gay, the fate of the single opposite gender was more than likely grim. On top of that, the vault’s inhabitants would die out after just a few decades, unable to sustain it’s population properly 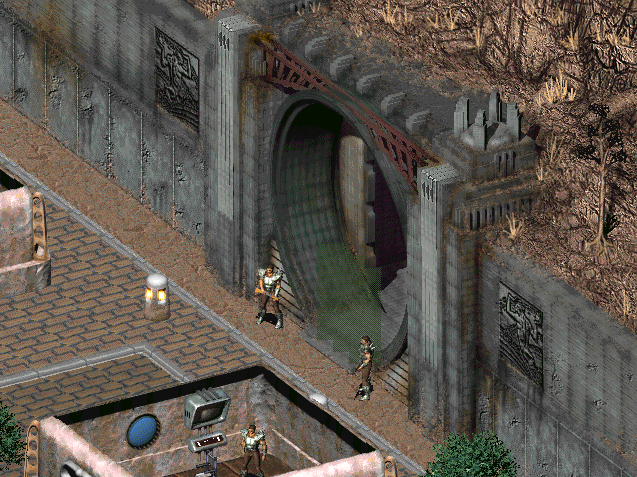 Vault 8 was designed to house a hundred or so dwellers. It opened as intended after receiving the all-clear signal, and its residents emerged to begin rebuilding civilization. Vault City was the result. Years after its residents emerged, the shelter was used primarily as a medical center (quite possibly the best one in the Wasteland, outside of the Enclave or the BoS) for citizens, a power source (although the nuclear power plant cannot sustain a large settlement indefinitely), an information hub (Central Computer and its servers) and a storage space for ore and other supplies essential to the well being of the city. Inhabitants of the city rarely (if ever) venture into the lower levels. Servants are tasked with keeping the vault clean, but they are unable to prevent deterioration – most of the vault doors are stuck and cannot be opened, while foreign items rattle in the air ducts. There is only one permanent inhabitant on the lower levels – Martin, who is a stuttering loner tasked with looking after the equipment in the Command Center. 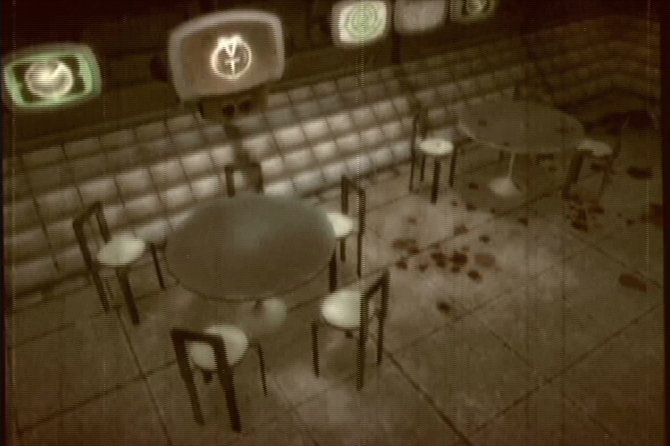 The Secret Vault is Vault-Tec’s private vault, designed as an underground research facility where its high-ranking personnel after the Great War can make their personal scientific research to survive the apocalypse and later enter the world having all the useful technologies and materials possible, behind the back of the Enclave and the vault experiment. The vault serves as a major research and production facility and, among its many technological artifacts, housed a special version of Forced Evolutionary Virus. The inhabitants of the Secret Vault not only lived in safety, but also attempted to study the new world above. There is evidence that they at least captured some brahmins and used them for both food and experimentation. Some time after the Great War, the Secret Vault was torn apart by a local civil war between Vault-Tec scientists and Blake, the chief security officer, who believed the research with FEV and radiation, conducted on living subjects, including humans, were “evil”. Their battles led to a major explosion that devastated the biological center section and enabled some species of radroaches and deathclaws, native to the Secret Vault, escape into the wasteland, at the same time allowing radscorpions and rats to invade the vault. CALIX (the AI in conrol of all of the vault’s systems) also suffered a malfunction, and lost control over majority of the security robots. The people of the vault were divided. While many of them now reside in the garden, other separated groups could be found all around the vault, including the main residence level, where the majority of people still lived. However, many died due to monster attacks. After the defeat of the Master, part of his army remained together, one part under the command of a former Master’s commander named Attis. Highly intelligent and vindictive towards the Brotherhood of Steel, Attis took his group into hiding, searching for clues regarding the history of FEV. Learning about a secret Vault-Tec installation with new and possibly improved versions of FEV, Attis led his group to the area where the rumors started, the ghoul city of Los. 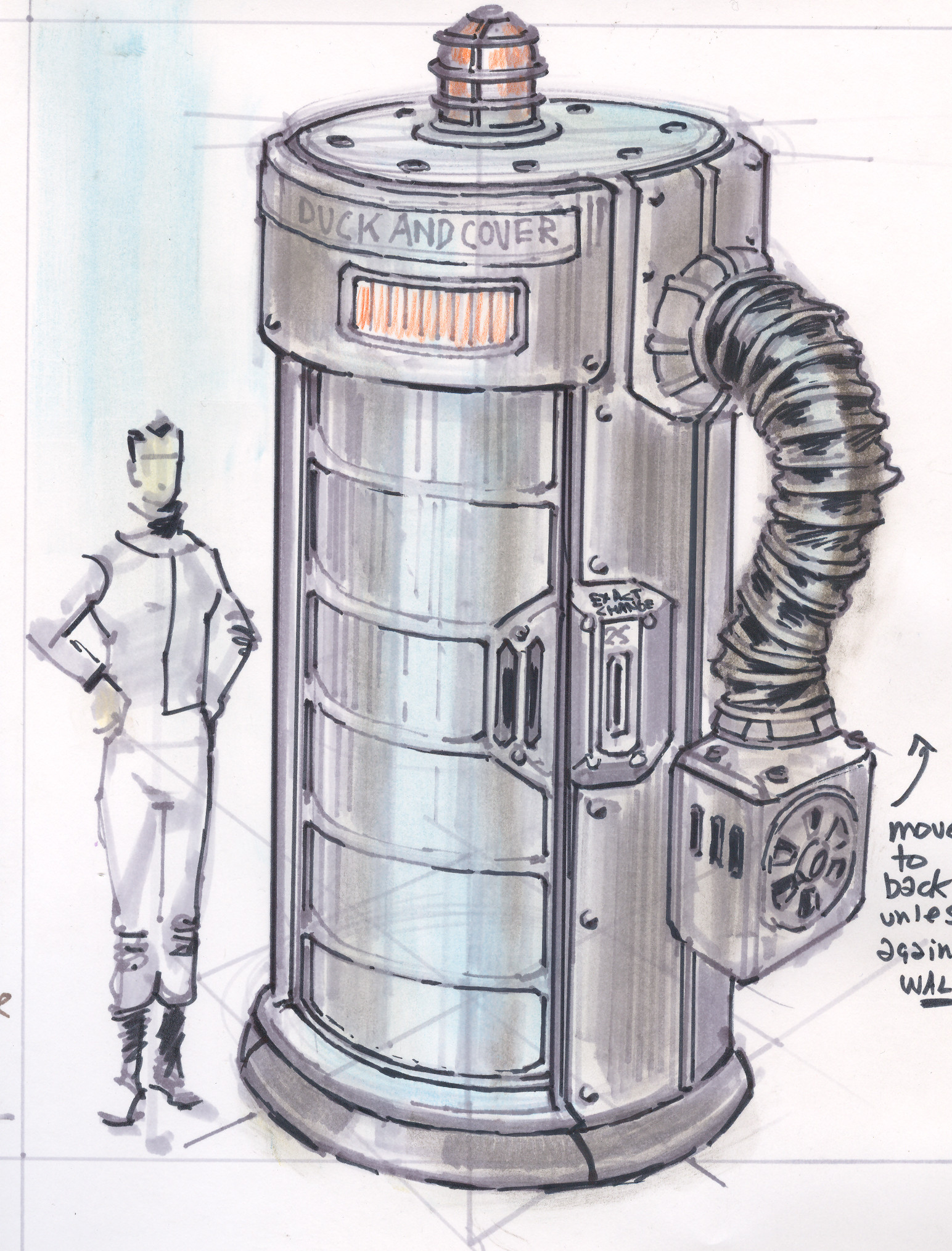 While nit a vault, or even a device produced by Vault-Tec, Pulowski Preservation shelters are coin-operated, one-person fallout shelters found on street corners throughout the more urban areas of the Capital Wasteland, provided by Pulowski Preservation Services. Advertised as a “sensible” and “affordable” alternative to the Vaults,[1] people would ostensibly use them as a last-minute resort in the event of a nuclear attack. Though the shelters can shield against explosive force, they do not seem to shield against radiation. It could be speculated that the installation of so many booths may be seen as a profiteering scheme in the climate of fear before the Great War began, or they may be simply in disrepair when found by the player. The shelters only had an air supply, no food or water, so the occupant’s survival was dependent on what they were carrying at the time. Whether any occupant survived through the use of these shelters is unknown, though many are filled with skeletons, suggesting the majority of occupants died trapped inside. The last-minute nature of the booth meant that ill-prepared occupants were likely resigned to die from starvation if they survived the high radiation levels. Considering the blood splatters within several booths containing handguns, it seems that some occupants committed suicide after losing all hope of survival. The only advice offered after entering the booth is: “Wait for radiation to clear. Enjoy your stay.” Although somewhat illogical, it seems these shelters were intended to be reusable; considering the tone of advertising the shelters were given, the risk and cost of nuclear devastation pre-War was likely greatly underestimated by the general public. 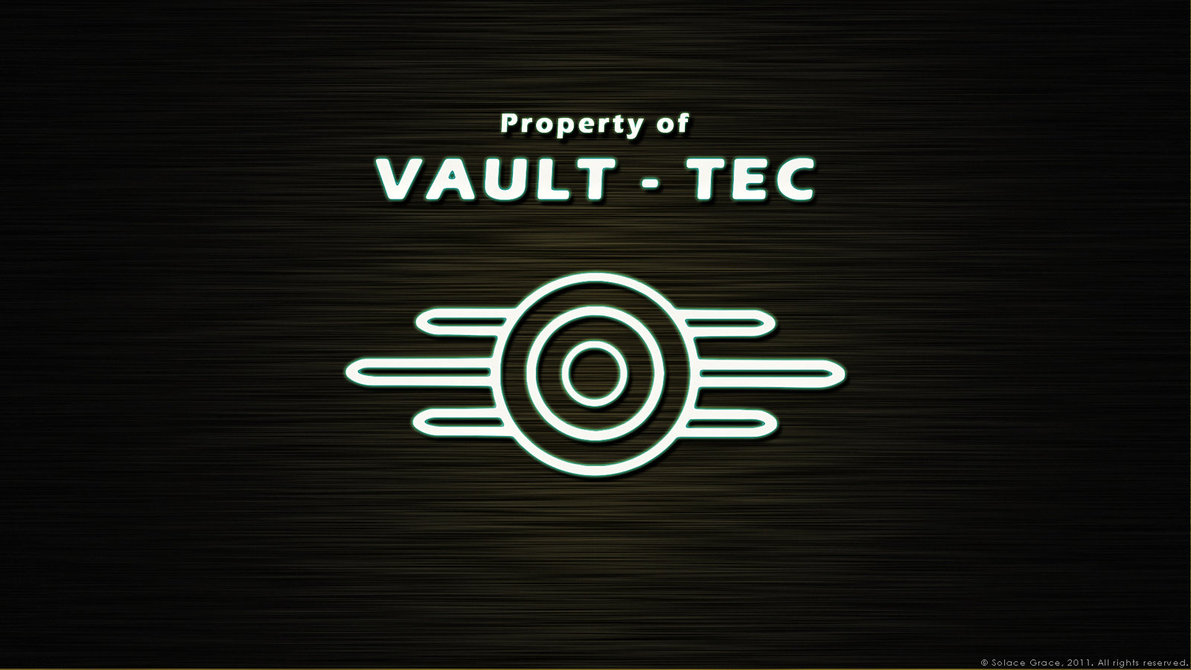 Several other vaults are mentioned in various sources, on of the primary of those being the Fallout bible, a collection of developer notes collected into 9 volumes. Several of these vaults are Vault 36: Food extruder would only dispense a thin, watery gruel Vault 39: A massive vault able to house thousands of residents, experimentation with a G.E.C.K (Garden of Eden creation kit) turned it into an underground jungle Vault 42: No light bulbs of more than 40 watts were provided Vault 74: Experimental value is unknown, the only clue to the fate of the residents is a note found in the Overseer’s office: Data Log #10.44.78 The Vault has been breached. There was not enough power to level Five! God have mercy on our souls.

How to Build Your Very Own Cosy Cottage in Minecraft